One group says they believe in purity,
and socially security for families,
through marriage where the father
owns all the property by himself
and directs the values of the family
because they cannot direct themselves,
all with anyone ever calling it 'Patriarchy'.

They say they believe in Creationism,
a hierarchy where God tells the man,
to tell his wife and children
that root and branch, man,
woman and their offspring
who have to be above the animals
and the plants, of which they live
that live and die with no regard
to property, or buying or selling
not even when men trap, eat,
and and sell them to other men.

The other group are men
who believe in evolution
in order to accept the sensuality
that family values says cannot exist
in 'do not touch' type societies.

There 'family values' are law,
the whole of the law,
and nothing but the law,
but in secret these men celebrate
their (r)evolutionary sensuality,
denying even the temptation
to voyeurism, a warping of their creed,
that 'family values' invites,
and never admitting that what they do
has a name, where it's name is 'cottaging'.

The family values they hide from
mean that the part they share less
are their lips which respond
to the gentlest of shared movements.

Email ThisBlogThis!Share to TwitterShare to FacebookShare to Pinterest
Labels: creationism vs belief in evolution, sensuality

I had placed four friendly plastic bags,Which once held loving gifts of fruit,Chocolate, magazines, flowers.Firmly over my headIn the cloakroom of the locked ward.Like Legion, I wrestled with the demons.Tramp, tramp tramping through my brain.A legion was a Roman Regiment ofSix thousand troops.Show me a more accurate picture of mental illness.After my failed cloakroom debacle on the ward,The self harming  (….razors, needles, fire)Young girls aged 14 to 21,And I were irresistibly drawn together,Our hollow eyes locked in a nightmare of understanding.They mothering my ageing self withHugs, toffees under the pillow,Carefully drawn pictures,The delicate offering of painting my fingernailsIn shocking pink.Caught tears at two in the morning.Legion, in among the tombs, watching his demonsCrashing via two thousand pigs over the Gadarene cliffs;The relief of it! echoed later as he sits,Clothed and in his right mind,Calmly.By the side of Jesus.Who is to say that an echoing miracle was not begun in my mind,(But slowly)By that small regiment of unlikely,Oh so young, self-scarred angelsIn the locked ward?After allHere I am sitting, calmly, writing poetry once more.
By Belfast author, poet and Christian activist Sylvia Sands, about whom I wish I knew more from here.
Posted by Bearz at 01:13 No comments: 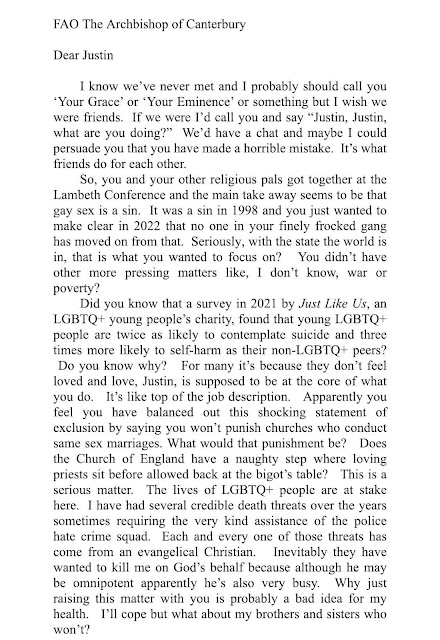 It is years, decades, since The Grateful Dead
sealed their reputation and invented 'Americana'
long before other song writers took up the mantle,
now attributed The Dead, where songs described
where they lived and who had lived before them.

The Grateful Dead were long gone by the time
'Americana' became shorthand for lazy reporters,
they were worn out from from touring and decay

Now they are more a memory
in the frazzled minds of the punters
of gigs they put on, gigs where
as one attendee of their 1972 tour
now memorably described them
as 'The rock and roll equivalent
of a cricket test match, lots of lulls
with unexpected flashes of excitement'.

It is forty one years since I was first bowled over,
and there have been many lulls in my life since,
but the band have been the constant to me
through many dwelling and relationships
they will see me thought many more...

Email ThisBlogThis!Share to TwitterShare to FacebookShare to Pinterest
Labels: The Grateful Dead-a consideration

about Judas, a disciple he liked, and his accountant,
'Keep your friends close, and your enemies closer
and for God's sake make sure you know the difference'.

What Jesus thought about how to trust
an accountant was never recorded....

'My family made the pilgrimage to this town in 1999 just after we lost our cotton gin* to a corporate competitor, long after the town had transformed itself into a place for retired Chicagoans and Southern fundamentalists to buy cheap property where it was safe to keep and bear arms and brag about it. In the five years since we'd moved, my parents had leaned how to fit in with some of the Northerners, talk with a slightly nasal accent, smile less. People came here to change their live for the better, to live at a different pace, though later I would learn that a change of scenery would never change somebody like me..... '

'I hadn't felt truly natural since junior high, when I first saw my handsome neighbour walking his dog down the street: a moment that had me begging secretly for a leash. "I don't want to talk about it' I said

"Your friend what's-his-name didn't have a problem talking about it." Friend. The word sounded cavalier, without a trace of irony, landing smugly between the blinker's ticking like a hard fact. It made me want to want jerk the wheel in the wrong direction, slam the gas pedal and drive us into the side of the nearest building.".

*A cotton gin, or cotton engine, is a machine that quickly and easily separates cotton fibres from their seeds, enabling much greater productivity than manual cotton separation.

Three quotes from the spare and haunting 'Boy Erased' by Garrard Conley.

Soon the Church of England
will gather together yet again
to agree on the churches' stance
on the sexual mores of their members.

Once again they will declare
that the imperative to breed,
declared in the Old Testament,
as a key part of their creed.

What they refuse to accept,
is that humans have over-bred
and have over-run the planet
and that non-procreative sex
is the safest sex for the planet,
which would like to keep fewer of us
in far less luxury a lot better
than we presently expect.

So whilst the Church of England
aridly justifies desert values for breeding
let us resist; it will create too many of us
for the green brown and blue of the planet
to remain rich in their natural colours
and not be returned to inhospitable desert
that won't even support talking snakes
or any other primitive life forms.

Bearz
I am a sort of person. I sometimes make things.