'So with the new merchant banking what we get is a shift
from a world based on relationships [between bankers]
to a world based upon transactions and trading.
But trading dominated by the investment banking culture
[with] people who have no loyalty, either to their customers
or to the organizations for whom they worked.
And they are concerned to make a transaction
[whether it is] in a few hours or a few milliseconds.
And once that transaction is made it is over. It's anonymous,
their [the new merchant bankers] only motivation is to make
as much money as they can for themselves in as short an interval of time...  '
-a quote broadcast by Professor John Kay speaking on the recent Radio 4
documentary 'Fixing Broken Banking '.
Posted by Bearz at 12:23 No comments:

The Home Of The Open Question

is building walls,
behind which to keep ourselves in comfort.
The second oldest world faith is war
-destroying other people walls.
Religion in the modern world
builds walls that are not just physical.
Conversion is an immurement in words,
the better to multiply misunderstanding.

The Art Of The Weather

On BBC 24 hour news weather reports
arrive half hourly, like empty buses
on which nobody alights.
Every forecast  has a background picture
that is meant to illustrate what the presenter has to say.
I wonder, would the weather have more class
if for backgrounds, instead of using  photographs,
the BBC selected nineteenth century oils paintings,
as made by W. M. Turner, or Gustav Courbet? 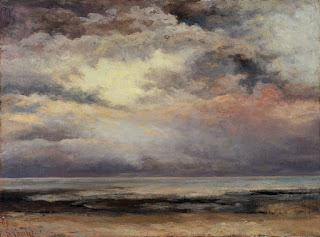 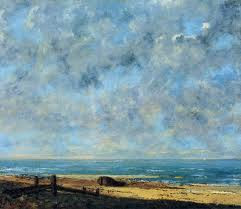 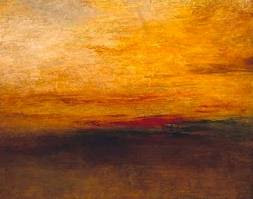 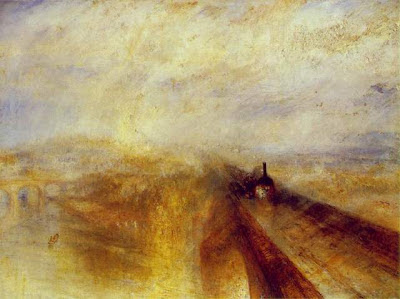 A Message To The All The Churches

Email ThisBlogThis!Share to TwitterShare to FacebookShare to Pinterest
Labels: stasis vs entropy

'If you want to really hurt your parents
but don't have the nerve to be gay,
the least you can do is go into the arts'
-Kurt Vonnegut

I Will Celebrate Neil Armstrong

more for the containers he engineered,
to line the breast pockets of shirts
and save the shirt when ballpoint pens
naturally leaked, than ever I will rejoice
in his token film appearance
as the apogee of american imperialism.
I wish he had kept the moon as clean
as he wanted to keep everyone's washing. 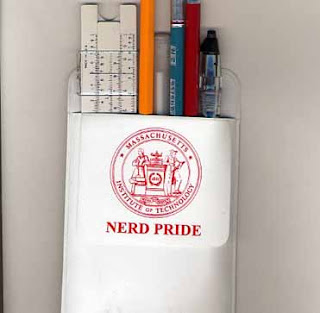 The Height Of Insincerity

is always to be found among bureaucrats

and in committees, where those collected
are least likely to say what they mean,
or mean what they say.
Posted by Bearz at 03:12 No comments:

one trickle-down effect
is that the goods offered
to charity shops decline
in quality and quantity.

Another effect is that
in the unawareness
of their meanness
people still thieve
from these places,
thinking the charity
should be towards
them most of all .
Posted by Bearz at 03:11 No comments:

Where There Are No Trees,

in highly urban spaces,
human life is nearer
mere existence than fullness.
The banished trees
cannot show humans
how to exchange hugs.
Posted by Bearz at 03:42 No comments:

is not merely economic shrinkage,
or mis-planning for a double dip recession,
though it includes those negatives.
The positive is the nod to the the Jubilee
with deflation and clearing debts.

Recessions will dare us to share
all we have, and if we take the dare
then we can live beyond greenwash.
We might see that ultimate unlimited
fixed economy without entropy
that the living so easily misunderstand: Heaven.

Email ThisBlogThis!Share to TwitterShare to FacebookShare to Pinterest
Labels: ultimate altruism remains a long way off

(one of many), he lived with locked-in syndrome.
After a court refused him an agreeably
mutual and personal way to end his life
he starved himself and died of pneumonia.

For thirty years I had a friend and mentor
whom I knew only through phone calls
and letters. She did not do e-mail.
For having the urge to share
I wrote much more than her,
and I was happy to give away
my ideas. Even now, so soon after she has gone,
I forget how the stories poured out of me.
I was told after she died how she took her life
by self starvation and pneumonia.
Her closest friend (not her husband)
told me how on her last night she was taken
to hospital, was almost ritually bathed,
and had her final rest in the comfort
of crisp clean hospital sheets.

She too was locked-in, by marriage
and family, not considered to be a person.
More used as property without respect.

The quieter the sense of loss, the less recognised it is,
the more courage we need to exit on our own terms.
Posted by Bearz at 04:56 No comments:

Email ThisBlogThis!Share to TwitterShare to FacebookShare to Pinterest
Labels: choice, death, self control

This Blog Is Taking A Short Rest

Email ThisBlogThis!Share to TwitterShare to FacebookShare to Pinterest
Labels: ease and calm, steam trains and thunder

Discomfort Is Inevitable In Life.

The older we get the more sure
we can be that it will arrive.
Often it obscures itself,
in how it comes to us.
What matter most
is that we learn from it.
Given that it is inevitable
I would prefer the pain
to come from the clarity
of honesty more than
the pain of misremembering.
Posted by Bearz at 03:02 No comments:

Email ThisBlogThis!Share to TwitterShare to FacebookShare to Pinterest
Labels: choice, euthenasia, self awareness

Punching Above Your Weight,

like many nation states
are frequently said to do,
seems so tiring.
I would rather lighten my mind
to match the weight
behind my punch instead.
Posted by Bearz at 02:47 No comments:

is one of the older ensigns in the world,
as old as global trade and city states.
King Henry VIII and other absolute
rulers refined the values behind piracy
before it became fully fledged,
with their self justified theft
from less well formed states,
and from each other on the high seas.

Piracy is the foundation of every
Kleptocracy in history, every empire
is built on rule by theft. In the USA
piracy became law made by lawyers.
When did you last see a poor american lawyer?

Tax evasion is the new piracy.
Where a single multi-national corporation
earns more every year than the GDP
of most third world countries-combined,
with their advanced new technologies
on which the new world runs-what
else to do but salt away the money?

International banks, who operate
through secretive micro-nation states,
many of them formerly British colonies,
are the new pirates best defenders.

with a glossy coat and good teeth',
aptly describes the four legged
entrants of Crufts,
the world-famous dog show.
It describes even better their owners.

The description also fits
the human entrants of every
rigged popular music reality
-television psuedo-competition
where the sponsors win the most.

The dogs as victims of freakish
breeding and over pampering
deserve some sympathy, much more
than their talent show equivalents.

The most tragic element of both
entertainments is the audience
who passively accept such
over-wrought artificialities.
Posted by Bearz at 08:52 No comments:

is the height of human achievement,
it is our greatest enabler. What galls
under achievers like myself is the ease
with which those who fake sincerity best
think so lightly on their gift,
while others struggle to dissemble.
Posted by Bearz at 01:46 No comments:

Email ThisBlogThis!Share to TwitterShare to FacebookShare to Pinterest
Labels: authenticity

The Truth In My Bones

Therapy exists because
some people are so mean
that meanness is all they own.
Their soul thrives on the consistency
with which they recycle their meanness,
shrinking the spirit in all they touch,
making everything smaller and drabber
than it was ever meant to be.

Though I have used  therapy, I don't like it.
Like my hero Kierkegaard  I mistrust the soul
ascribed to me, and pray to be less divided.
As the grave calls honestly for my bones,
I find  they are what I follow, to know
how full of ease with life I should be.
Posted by Bearz at 04:36 No comments:

When Gratitude Comes From Simplicity

Some Habits decline slowly and others stay.
When I was young I watched children's television
on the BBC. They made a point of presenters
broadcasting live for that sense of vitality.
Each episode ended with the presenters
waving into camera and  said 'Goodbye'.
Sat at home I unthinkingly waved back.

Forty years later I still feel the courtesy
of those old television programmes,
where through the camera the presenter
I felt personally addressed.
Every night I turn off my lap top
and I wave to it and mouth 'Goodbye'
until we meet again in the morning.

I still find it odd how the good
in good manners is self renewing
but bad manners kill daily.
Posted by Bearz at 01:33 No comments:

As every Team GB Olympic medal winner
tells of how 'unbelievable' 'astonishing',
'amazing', and how incredible their victory is
on my main source of news, BBC radio,
I refuse to let the Olympic Games stay
on my television. I find myself agreeing
with them. As the crowds' roar reaches
into the quiet of my home and the breathless
athletes speak I say 'I don't believe it either'.
Posted by Bearz at 03:20 No comments:

A Bond That Is Strong

Email ThisBlogThis!Share to TwitterShare to FacebookShare to Pinterest
Labels: a picture/comment, strength

Where An Upgrade May Not Be So Wise

In these market led times where consumer choice
is bereft of moral value, it is a given that we are all
bound for hell in a hand cart. What is less asked
about 'the market', and general notion of choice,
is who is gets the luxury hand carts made for one?
And who's journey to hell starts with who they are
forced to share their journey with on their way there?
Given the destination what is an upgrade in your handcart worth?
Posted by Bearz at 08:41 No comments:

Choose Your Colour And Lose Your Choice 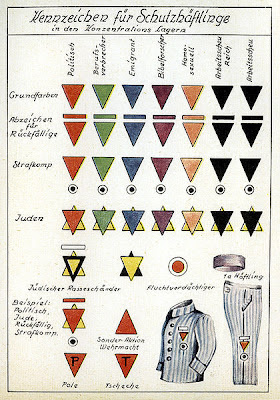 Concentration Camp Badges.
The black badges were for sick and disabled people.
The word arbeitsscheu means work shy.
With big thanks to mindinflux
for showing that the will to propaganda
is older than I thought,
and always ready to renew itself.

Gore Vidal:His Part In My Upbringing

On the day of the not quite unexpected death
of Gore Vidal I will tell here of how close to him
I lived in the small town I grew up in.

When I was young enough
to listen but too young to understand
or have mother explain herself to me
she often quoted him, on parenting.
'Never have children, only grandchildren'.
She meant it as my sex education.
I followed her advice and never married.
Quoting Gore, I now understand him more
than she ever did, much to her disappointment.
Posted by Bearz at 01:22 1 comment:

Bearz
I am a sort of person. I sometimes make things.